Have you ever paddled 20 km offshore to that far away reef or island in search of that one big fish? Being a kayak fishing fanatic, I paddle long distances on a regular basis. Whether it is in search of new fishing grounds or just to get to those offshore areas that I know hold good fish. I really don’t mind putting in the hard yards to get that trophy fish.

However, there are those reefs and islands that you dream about that are just a bit too far out of range for a day’s paddle. Even if you could paddle there it would leave you with little fishing time compared to long hours of paddling just to get there and back in one day. And what about sudden changes in weather you could face while being far offshore with nowhere to shelter?

Thankfully there are mothership trips that can offer us kayak fishing enthusiasts an offshore adventure we are dreaming about. A mothership is basically a boat that will get you and your kayak with all your gear to those places that are beyond your paddling capabilities, leaving you plenty of time to fish rather than having to think about the sluggish long paddle back. Be it for a one day trip or multi day trip the options are vast, enough to get any kayak fisherman excited.

Recently, the team at Viking Kayaks here in New Zealand invited me to join them on such a mothership trip. How could I say no to such a trip? The dates were locked in and the excitement grew as I had heard so much about mothership trips but never experienced one myself. New Zealand’s east coast has so many offshore islands and reefs on offer, some are even too far for the average trailer boat to travel to, so having the chance to fish one of these islands in a kayak was a dream come true.

This being my first mothership trip, my mind was brewing with thoughts of all those big fish I hoped to catch but it also was a great chance to test out the new edition to the Viking Kayaks range, the Profish GT, a kayak designed with mothership trips in mind.

I’m very used to paddling my Viking Profish Reload and I do quite a few trips offshore so I know this kayak can handle everything I throw at it, whether it is surf, rough seas, waves over the side or strong winds, the stability and handling of this boat never ceases to amaze me. However, for this trip I decided to take the Profish GT instead which I had hardly paddled before. It was designed with mothership trips in mind, and with the weather looking like it was, it definitely was a good chance to see what this kayak was made of. The beauty of the concept behind the Reload and GT is that you can use the same Tackle Pod for both kayaks. So no need to install multiple fish finders etc. (you could of course, if you wanted to).

Our destination for this trip was Mercury Island and Cuvier Island which are situated south east of Great Barrier Island. Pelagic fish like marlin and yellow tail kingfish are common in this area, also bass, hapuka, snapper and other reef species are commonly caught there. Those are the makings of a perfect trip – now only the fish had to play ball.

With the departure day finally having arrived and with the kayaks and gear locked and loaded on board our mothership we launched from Kennedy Bay in the Coromandel and it was all on for a great weekend with like-minded kayak fishoes. The weather forecast was not ideal and we were in for some interesting conditions with swells predicted in excess of 3 metres.

We first went to Mercury Island in the hope that the weather improves  before moving to the intended fishing grounds around Civier Island. The fishing around Mercury Island was very tough under rough conditions. The decision was made to move on to Cuvier Island where we might find the fish we were hoping for. I guess that is one of the benefits of a mothership trip, you can move on to better fishing grounds without having to battle the elements on the kayak. 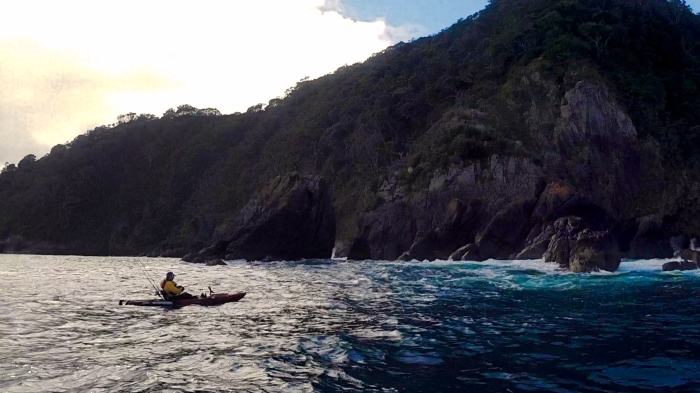 At Cuvier, after a very relaxed start with a nice hot breakfast and a cup of coffee served to us by our skipper (just another perk of mothership trips) it was time to get into some serious fishing!

Getting into your kayak from a moving boat is definitely a wee bit dodgy, especially if you are doing it for the first time. The niggling thought I had in the back of my mind was an instance my team mate recounted of one of his previous mothership trips where a rogue wave had picked up the back of the boat. His kayak got stuck underneath the boat and flipped him out. Luckily for me, I managed to plop myself into the kayak without making a scene and could get into the important part – fishing.

Cuvier is quite a small Island but from what you can see on marine charts, it has some great reef structure around the Island. There are quite a few deep reefs and rises just off the Island (“pins” as we call them here in New Zealand) definitely likely places to look for big fish.

The first couple of hours the fish were very hot on the bite, the fish sign on the sounder was 6 metres thick from the bottom, over quite a large area of reef. With all the bait fish in such abundance, I thought it best to drop down a knife jig to see if there was any yellowtail kingfish amongst the bait. After just a few jigs up from the bottom, I was hooked up. It turned out to be just a small snapper, hungry little bugger.

It’s quite amazing that a fish of this size would have a go at such a large jig 300gm; however, snapper are quite a common by-catch here in New Zealand for jig fisherman targeting kingfish.

The snapper fishing was very consistent through the area of reef that I was fishing however the smaller fish did outnumber the bigger ones. On the outskirts of the bait fish sign though, there were some dark red arches indicating the swim bladders of some larger predatory fish.  Just what we were looking for.

When you are drifting quite a fast speed, as I was at the time, the window of opportunity can be very small when targeting fish that are directly underneath your kayak. In this case I thought it best to drop down an inchiku style lure, thus allowing me to get my lure down as fast as possible but also giving the lure more time in the strike zone.

First drop resulted in a solid hook up; unfortunately, the fish found a patch of reef and managed to wedge its self under a rock and busted me off. It’s remarkable how cunning some fish are and always know where to go.

This is one of the snapper I did manage to land. “Just a baby around these ways”.

The fishing did slow down as the day went on, well, not for all as it transpired. We did receive a call over the VHF from Stephen Tapp, general manager at Viking Kayaks and kayak fishing legend. Stephen had paddled out to one of the offshore reefs approximately 3 km from Cuvier and by the sounds was getting into some pretty solid snapper around that magical 20 lb mark. A man in his element. 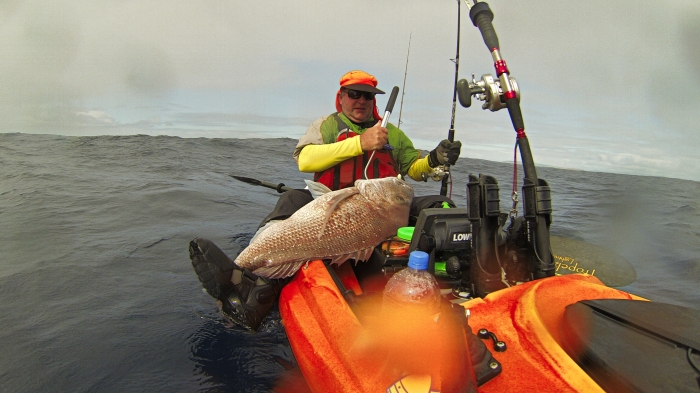 Day 2 at Cuvier, we only had a half day to fish, the fishing was proving to be pretty slow… for some at least. I had a call over the VHF from my team mate Arnie who at the time had seen a school of big kingfish pass by underneath his kayak. Arnie decided to drop a jig down but at the same time he was hooked up to a snapper on another rod, I’m sure you can guess what happened from here… yep, double hookup! As I paddled over to Arnie I couldn’t help but laugh as he had a nice size snapper sitting between his legs and was now into a full blown dog fight with a big kingfish.

He did managed to land the kingfish with the snapper safely tugged under his thighs (never mind the spikes). And what a beauty it was, a whopping 17 kg kingfish. Who wouldn’t be happy with that. Great effort mate.

All in all I have to say I seriously enjoyed what a mothership has to offer. Getting to otherwise unreachable (paddle distance wise) areas is just great and it will not be the last trip I have done on one of those. If you have not experienced a mothership trip before than I can only encourage you to join one and you will see why it is such a great way to fish new areas. It is also good to know that the vessel is only a quick call over VHF away should you find yourself in need of assistance.

And the GT? Well, I have to admit I am seriously impressed by this compact fishing kayak. It is very manoeuvrable and feels very stable. And with the use of the same tackle pod concept as the Profish Reload where that saves you time setting up the kayak, very impressive.

Tight lines. Till next time.

Like Loading...
‹ Chasing Big Kingfish in the Coromandel – February 2015
Safety tips for night fishing from a kayak ›