Targeting Big Snapper from a Kayak In Auckland
Kayak fishing has been a passion of mine for almost 15 years now. It’s pretty safe to say within the first year of purchasing my first proper fishing kayak, my so called passion, very quickly turned in to an obsession. Why kayak fishing you might ask? For one, it’s inexpensive, you can basically launch anywhere you want, it’s good exercise, it’s environmentally friendly, and there’s also a real sense of achievement that comes along with it.
Over the years I’ve enjoyed fishing all around the North Island; Whangarei, Far North, Matai Bay, Coromandel, Bay of Plenty, etc. I’ve caught plenty of big snapper and kingfish around these locations, but where I really concentrate my efforts these days is in Auckland, YES those XOS snapper do exist here in Auckland, and you’d be amazed how many of these beasts are being caught by kayak fisherman! Kawau Island, Omaha, Tawharanui Peninsula, Leigh, Tiritiri Matangi, are the areas I have become very fond of. I have hunted fish from the shallows (3 metres of water), right out to the 60-70 metre mark, 15-20km off shore. There are trophy fish to be caught all over these areas, given you have right area knowledge and techniques.
On a recent trip in Auckland with a few lads from our New Zealand Kayak Fishing Group page, I was lucky enough to hook into some really nice snapper, quite a few nice snapper in fact, might have been something to do with the shooting star I had seen just before sunrise… I’m not sure? I mean, who the hell wishes for big snapper anyway…? Shhh don’t tell people..! A million dollars would have been nice! Funnily enough some of the other lads had seen the same shooting star, but it turns out that it was actually a fragment of a meteorite, as we found out later. If you ever see one of these things people, make a wish for sure! Anyway, back to the fishing. First cast of the soft bait, 5 metres of water, landed me a nice 7kg snapper. 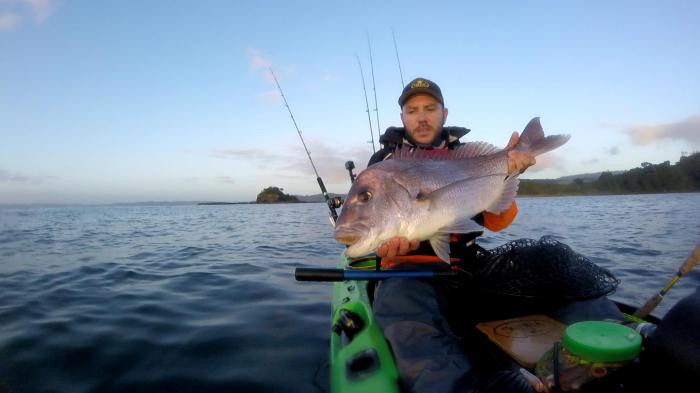 I returned that one back to tangaroa… 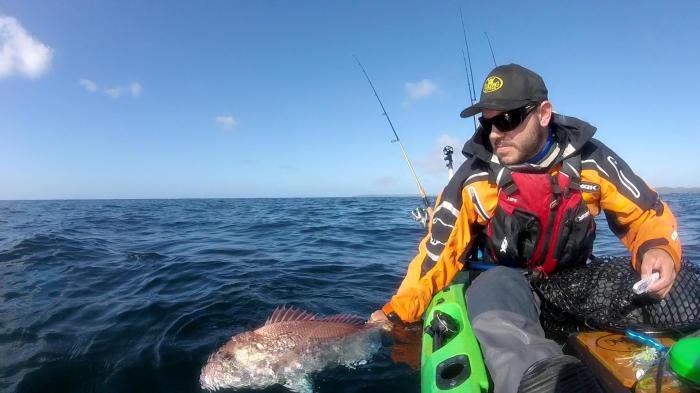 Next cast another one about the same size, a few casts later I was into an absolute dog fight with a massive snapper in some really shallow reefy waters! After an awesome fight of around 15 minutes, a nice snapper 25lb model popped up next to my kayak! Stoked!! This was just the start of an awesome day.

As the sun started to rise… and the boaties started to appear, the fishing in the shallows started to slow down (noisy buggers), so after a quick discussion with the possy, it was decided that we would start making our way out to some deeper pastures. On arrival to the 50 metre mark, the whole area was alive with bait fish, big schools of tuna everywhere, pretty exciting stuff for sure. A couple of the lads were hooking up on some small albcore and skip jack tuna on the soft plastics and kaburas, I hooked a few on the beta bugs (inchuku style lure) using a fast retrieve, but their soft mouths kept pulling the hooks, best to fish with a light drag setting, however I did manage to land a couple of small skippies, great fun to catch on the light gear and man they are awesome looking fish.

The hot fishing continued out in the deep water for a couple of hours, some of the lads were pulling up some nice snapper, William Kunst had a bit of an unfortunate moment… his personal best snapper of around 12-15lb flapped out of hands while he was trying to secure it, don’t worry William, I did see it! Unfortunately he didn’t have time to snap a photo either, I’m sure the mental image will last forever mate. I managed to hook into another fish around the 7kg mark this time, on the new white Beta Bug from Catch Fishing, this thing was dynamite on snapper over the day, white could definitely be my new favourite colour! 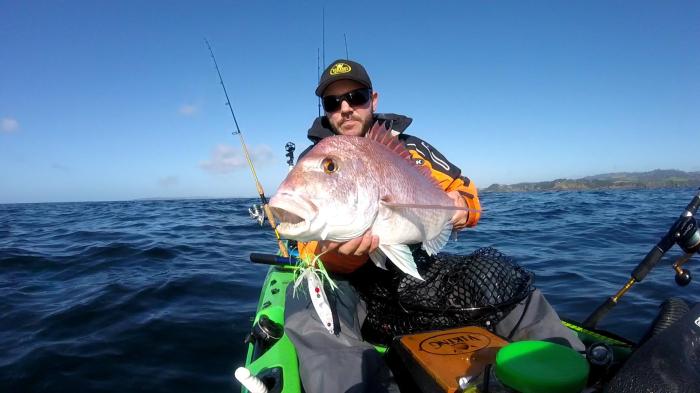 The fishing slowed not long after with the change of the tide, good time to re hydrate and have a feed yourself, while the fish aren’t biting. Myself and good mate of mine Justin Tunnage (JT), decided to head in a bit closer to shore to see if we could find some more fish. We got to around the 35 metre mark and we could see birds working the surface, more tuna smashing the bait schools, but also kingfish in the mix. I was a bit under gunned for kingfish, with all the light tackle on board, but what the hell one can only try aye! I cast out the soft bait 1oz jig head to get a good distance on the cast, a good fast retrieve action, through the school, and boom kingfish on! To be honest, I was hoping for a tuna but no probs, always keen for a bit of a scrap on the light gear. JT was kind enough to lend me his gaff, lucky for me at this time the kingfish had not realised it was hooked yet, made life a bit easier when it was time to grab the gaff, shot for that JT. This fish woke up straight after I grabbed the gaff… 40 minutes later, after a mean fight on the 3-6kg soft bait gear, a nice Auckland kingie of around 11kg surfaced, not massive but great fun for sure. 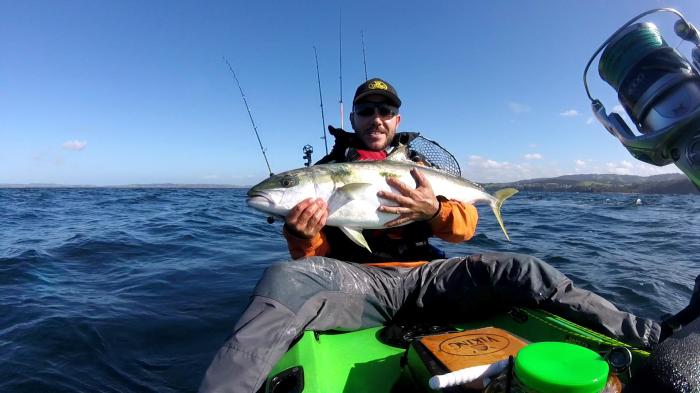 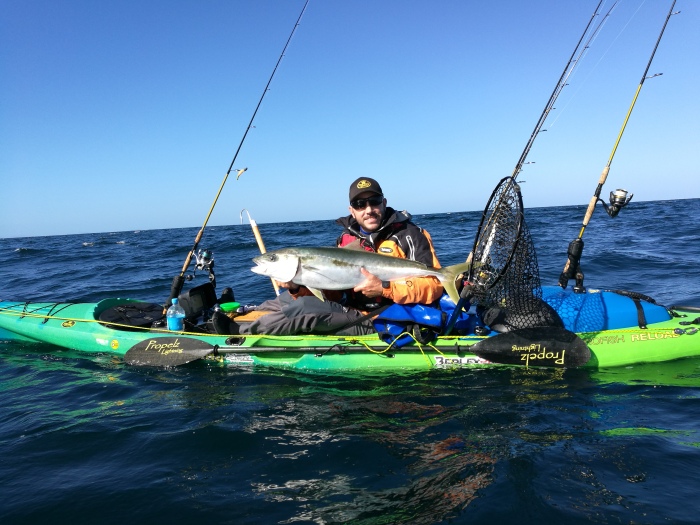 Fishing was hot in this area, JT and his team mate Ryan from Stealth Kayaks, were absolutely slaying it on the tuna, and another one of our group members Rob managed to land himself a nice kingfish too, around the 12kg mark. What an awesome day all around!

There’s a few tactics I use to target these big snapper from a kayak, with that said I thought I’d wrap this story up with a theory of mine that I’ve been putting in action over the last 5 years, and man I’ve had some great results using this positioning technique. Obviously some days out on the water the fishing can be really easy, you drop a lure and catch a fish regardless of the action you give your lure, or the way you position your vessel, other days the fish can be very tentative on the bite. Now I’m sure you’ve all encountered the frustrating phenomenon of plenty of bites, but no hook up’s? Well think about it this way, snapper can be very lazy hunters at times, especially in the colder months when there metabolism slows, so where you position your lure can be the difference between you just getting bites, or actually hooking that fish. Snapper more often than not, will sit up current of structure. When I say structure, this could be a reef, a rock or simply just a rise, you could even extend this theory to a shellfish bed or worm bed, quite often I will paddle up current of the area that I’m trying to target, and set up my drift so I can cast my lure down current (having a good fish finder GPS will really help you with positioning, takes all that guess work out of the equation). It might take you a few drifts to get yourself in the right position, but just take that time and get that drift perfect, because if you can put a swimming lure right in front of a snappers face, and they don’t have to turn around to chase it, well, they just can’t resist the urge to attack such an easy target. Obviously there’s a few factors that can make this a bit more difficult, wind I would have to say would be the biggest culprit, but you know the great thing about fishing from a kayak, is your casting angle is 180 degrees, and if you have a running rig anchor system (pully system) this allows you to set your desired drift angle of the kayak. I quite often have my drift chute out to the side of the kayak, just to get the angle I want. In short, my advice is to study those marine charts, look for those unmarked reefs or rises, use your electronics to hunt the fish down, mark them on your GPS, and set up the best drift angle, good luck! Be sure to check the video from our epic day in the link below!