After having experienced my first mothership trip with the boys from Viking Kayaks back in April I was hooked on this type of fishing and I was certain I wanted to go on another one soon. Well, I did not have to wait long. A few weeks back I snapped up the chance to jump on one of Rob Fort’s Mothership Adventures trips as a spot became available. It was bound for Great Barrier Island – I had fished the Barrier quite a number of times in a boat but never in a kayak. This definitely was a kayak fishing destination that was high up on my bucket list. Dates were locked in for July and here was hoping that the weather played ball as another mothership trip had to be cancelled due to bad weather.

The weather gods gave us a weather window for Friday & Saturday, so the decision was made to move the trip forward by a day to use that very promising weather window and make the most of it as a front was meant to move in on Sunday. And what glorious two days we had at Great Barrier – a kayak fisherman’s dream.

This trip was the maiden voyage (as a mothership that is) for the boat Joint Venture (Coromandel Fishing Charters) and after seeing the set-up of the vessel all was looking to become a very promising and memorable trip for everyone involved. So, with kayaks and gear loaded we launched around 6am from inside Coromandel Harbour for an overnight trip to Great Barrier Island. Upon departure we were greeted by an awesome sunrise and Dolphins on the way out of the harbour. What a start to the trip. 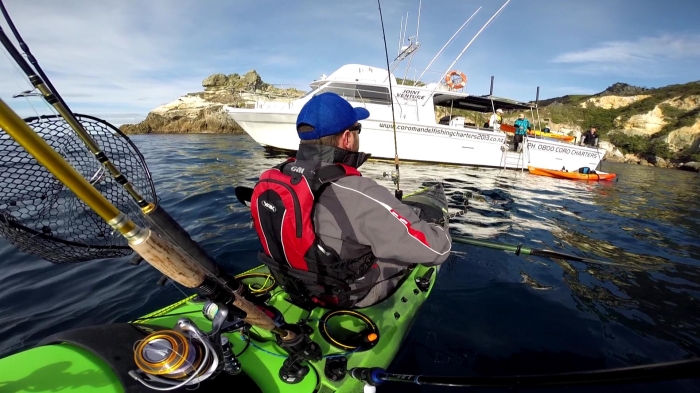 Our mothership for the trip “Joint Venture”

The vessel Joint Venture is a flat deck boat with racks above made purposely for storing kayaks – a very functional and spacious 17 metre boat. A couple of hours of travelling and we were already at the Barrier. First stop was Cape Barrier for a quick jig from the boat. Not much happening on the kingfish front but Karl ended up pulling a nice snapper on a 300gm jig. Soon after, we headed off to our first kayak fishing spot around the far side of the Barrier, Arid Island.

The system of getting the kayaks into the water is great (as you’ll see in the video) the ladder on the side of the boat makes it very easy to get into your kayak. The time had come! I was in my yak and ready to do some hunting! Deciding where to head first was the hard part…

The great thing about Great Barrier is that you have so many options. If the fish are not found in the shallows, you can paddle out to one of the hundreds of offshore reefs. I started off in the shallows fishing with softbaits. I landed a couple of snappers, one that was around the 10lb mark, before heading out to the deep. 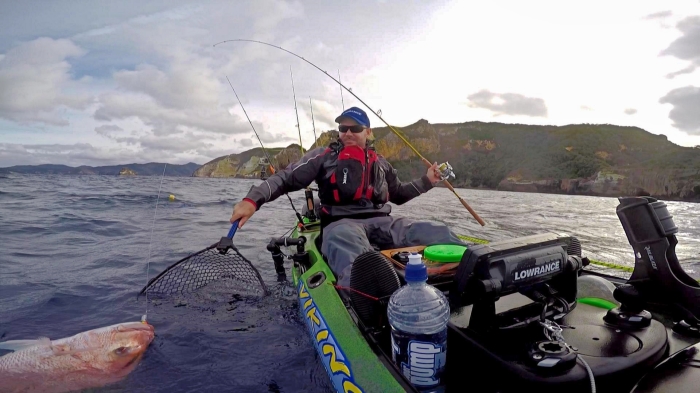 You have probably heard boaties talking of pin jumping; well, this is what I was doing in the kayak. There are so many reefs and rises over this side of the Barrier and some of them are literally 100 metres from one another. I found a nice slight rise in around 80 metres of water that was holding some good snapper sign. I fished this sign for a good couple of hours, no massive fish, but I was constantly hooked up. There was also a nice variety of fish on offer; snapper, blue cod, granddaddy hapuka and the much loved barracouta; and some of the other lads also hooked up on some kingfish. 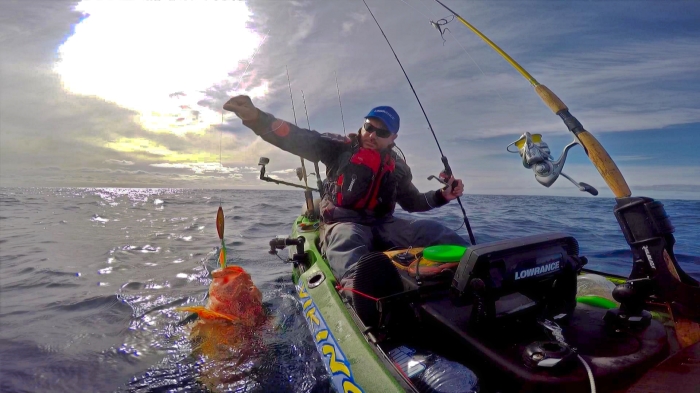 A nice Granddaddy Hapuka, if only I had taken some gloves.

With the sun setting, it was time to call it a day. We all made our way back to the boat to have a feed and get recharged for another day of fishing. On return to the boat it was good to see that some of the lads on the boat had already landed their PB snappers. Smiles all around…

While we were out fishing, Rob had jumped in the water for a quick free dive. So along with our raw fish entrée, we had paua to go along with it. Yum! After a couple of beers and laugh, we were all in bed by 9pm wondering what the next day will bring.

After a good night’s sleep, we had a quick early morning fish around Arid Island again before packing up and heading around to the north eastern tip of Great Barrier, the Needles. It was quite nice to arrive at the Needles to see that there was not one boat in sight. We were all rearing to get back in the water for some more action. 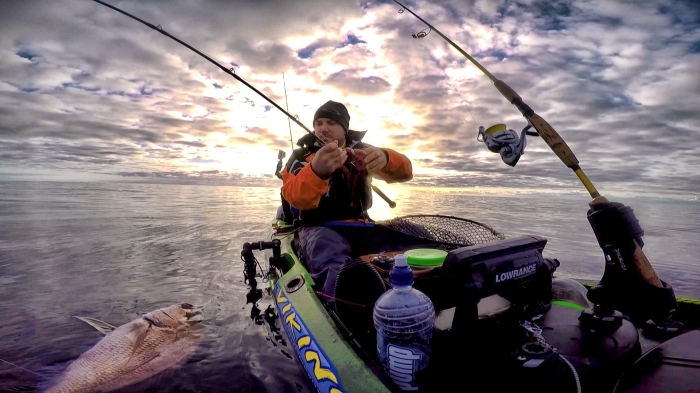 After losing a big snapper at the Barrier on a previous trip, my target for the day was just a big Barrier snapper. I found some really solid sign in 38 metres of water, my first cast had me hooked up to a solid fish. I could see that my front camera was full of salt so I pulled out my cloth and tried to clean it while I was still hooked up. Bad call, I managed to lose the fish in the process. Oh well, the downsides of always wanting clear footage.

There was no time fretting about it too much. Next cast, I was into another solid fish, this fish felt even bigger than the one I had just lost. I called up Rob on the VHF and said “this is a big one bro” Rob and skipper Jordan rolled on over in the boat and started filming.

I had as much pressure as I could on this fish and considering I only had 10lb braid, it was anyone’s game. It was a solid 15-20 minute fight before the fish came up to greet me at the side of the kayak. It weighed in at 24 lbs. Stoked! 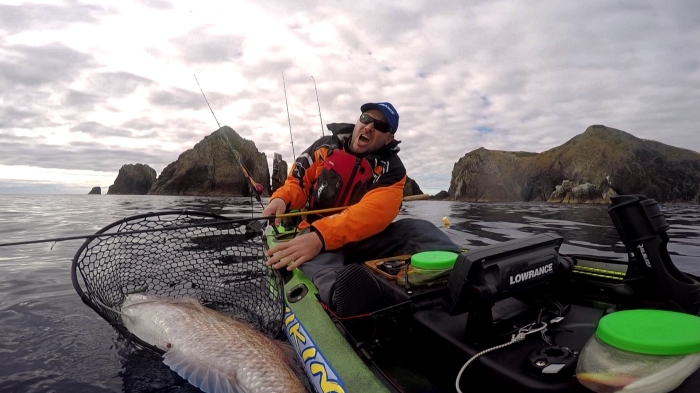 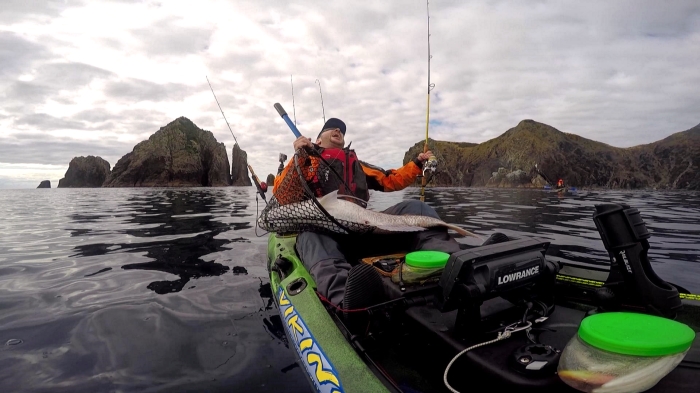 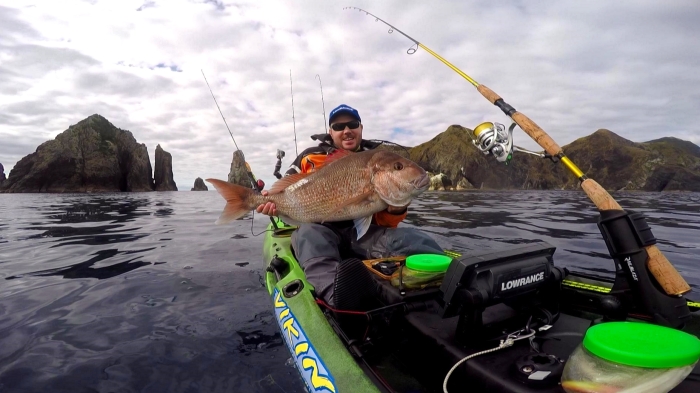 At the same time as I was hooked up to my snapper, another kayak angler, Barry, was hooked up to a very decent kingfish… When I say decent I mean Three Kings decent. Barry’s first legal kingfish from the kayak weighed in at a whopping 28kg!! Great effort bro! That was one monster kingfish.

This trip couldn’t have gone any better, the weather was perfect and most anglers landed their PBs, for some both snapper and kingfish. The boat is well set up for kayaks and fishing, Rob and Jordan do a great job of organising everything, giving maximum time on the water. Thanks to VHF they were only moments away to assist or, as in my case, to get that big catch on camera. I highly recommend this trip to any kayak angler that is looking at doing an offshore adventure.

Check out the video to this memorable trip: