With the thought of big Snapper and Kingfish lingering in my mind for the past couple of weeks, and great trip reports coming from the far north, it was time for a mission. I invited a friend of mine to join me for a weekend of kayak fishing up in Matai Bay. Unfortunately, during the week my friend cut his finger with a drop saw (to the bone), yep not a good start, surprisingly he still wanted to come along and even managed to come out for a fish (big props to you mate).

Matai Bay, at the end of the Karikari Peninsula, what a beautiful place to explore in a kayak, the fishing options around this place are endless, great shallow reefs with good current flow and deep water not far from land, fisherman’s paradise! 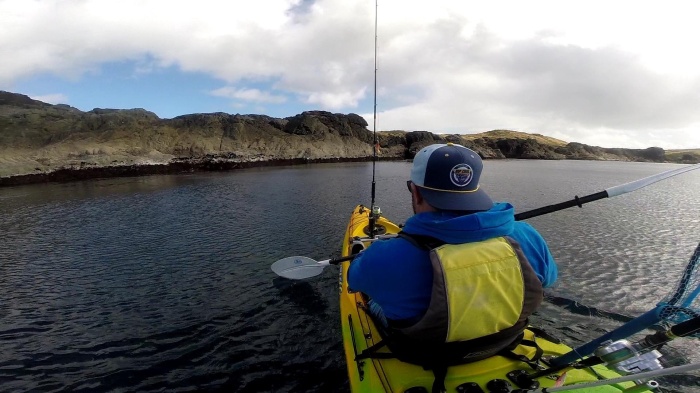 We didn’t have much of a game plan for the Saturday as the weather was not looking too favourable… don’t let these pictures fool you, it was nice and sheltered close in to the land, but let me tell you the wind was howling a bit further out.

We decided to try some shallow water soft baiting close in to the rocks, fishing in depths between 5- 15 metres. My first fish of the day was a nice Snapper estimated at around 15 pound, unfortunately it was raining at the time so I didn’t bother to turn the camera on, the fish put up a great fight in 6 metres of water and was nice and healthy for a good release. I could see my friend in the distance holding up a nice fish not long after, unfortunately he had to retire soon after because of his finger.

Being the super keen fisherman I am, the rain and wind wasn’t going to stop me! I tried my best to get some camera footage when I could… I like my camera lens to be spotless so I was constantly cleaning them.

I managed to hook up on some more Snapper, casting soft baits into the shallows.

Nice little string puller and finally a clean camera lens. You can see the rain in the distance. 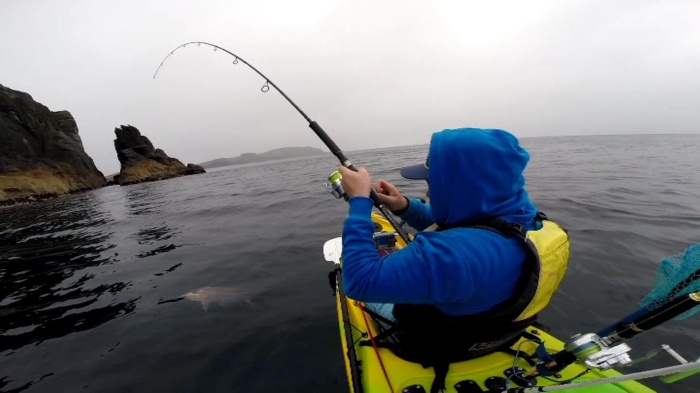 Give him a chance to grow a bit bigger.

With the rain and wind not playing ball with the cameras I decided just to enjoy the fishing for a while without them. I landed quite a few more Snapper of the same calibre and a good size John Dory, all caught on Zman softbaits in less than 15 metres of water.

Finally got some blue sky in the end, and some more Snapper.

I found a nice little reef in around 30 metres of water. It was holding some good Snapper sign. I was hooked up instantly on the drop using a Abu Garcia Veritas 4-8kg, awesome little rod, nice soft tip action, light and great casting capability, the reel is a Shimano Sustain. This fish was caught a slow jig (Catch Beta Bug). I’ll be writing a full review on these lures next month so keep an eye out if you interested in fishing with slow jigs. 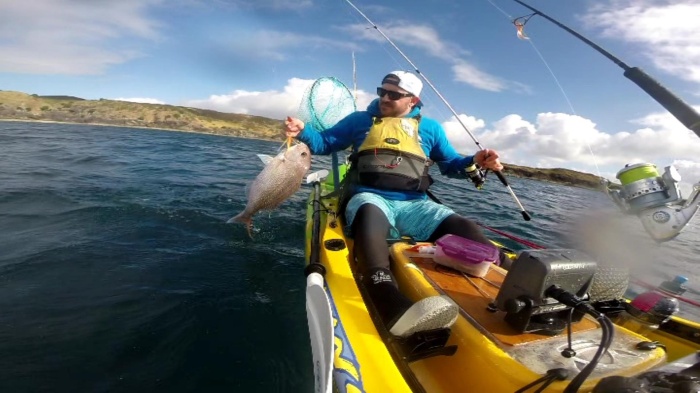 With the wind picking up in the afternoon I decided to cut a track.  I battled quite a nasty headwind on the paddle back… all in good fun.

No worries the mighty Viking Profish 400 can handle it.

Sunday weather was looking good, and I was getting excited about fishing with a local kayak fishing legend, targeting Kingfish and Hapuka. Unfortunately, I had some car trouble and couldn’t fish the second day. From what I had heard the Kingfish were on the bite. I will definitely be going back soon for round two at Matai Bay. Till next time…

Check out the video action over the day.